We have all heard the phrase “time flies,” but man does it! Lately, we have found ourselves asking “where did the year go?” As first--almost second year--fellows, this question has forced us to pause and reflect on the ups, downs, and everything in-between. Over the span of this seemingly fast-paced year, we have gained insight into the interdisciplinary and multi-sectoral world of public health, become more intimately acquainted with the communities we serve, and grown as public health professionals. Therefore, as the first year fellows get ready to jump into year two, we wanted to share some insight with the upcoming cohort and give others a snapshot of how the fellowship encourages growth and stimulates learning in the first year.


What tips do you have for incoming fellows?


What opportunities should fellows take advantage of during the first year?


Is there anything else you would like to tell first years OR that you would have liked to know before you started?


Curious to learn more? One of our fellows could not have said it any better -


“Have coffee with a former Fellow! Our fellowship community is very welcoming and wants you to succeed. Meeting with former Fellows was helpful and encouraging.”


The invitation is always open - We hope to connect with you!

Posted by WI Population Health Fellows at 9:21 AM 29 comments:

Zoonotic Disease, Up Close and Personal

Sometimes our work in public health and our personal health collide.  This month, I tied up my soon-to-be published report of a tickborne illness called babesiosis, and I visited our future home in wooded and beautiful Ithaca, NY for an up close and personal encounter with tickborne disease risk.

We often joke that my eldest daughter Quinn “turns feral” when she encounters nature.  I love watching her transformation from a quiet, somewhat anxious child into a forest sprite, running through the woods without a care in the world.  Unfortunately, as a parent, I have to consider the risks of this outdoor activity, especially in an area endemic for Lyme, Babesiosis, Powassan Virus, and Anaplasmosis.  On our last day of our upstate NY trip, we took a trip to our future house and its wooded land and pasture. Out of our family of four, only Quinn ended up with a dozen nymph deer ticks on her head and body, presumably because she got closer to nature than the rest of us.  After a lengthy head and body check at the airport before our Sunday evening flight, we felt confidant we’d pulled all the ticks off.  On Thursday, we got a call from her principal at school who reported Quinn had the engorged tick on her ear. We took advantage of a free University of Rhode Island lab service, and, using an emailed picture, they identified it as an adult female deer tick and estimated it had been feeding for 3.5 days.
Lyme is transmitted by the spirochete Borellia burgdorferi. Its vector is the black legged deer tick, which becomes infected by mammalian hosts such as deer and white-footed mice.  Initially discovered in the 1960’s in Lyme, CT, it is endemic to the upper Midwest and Northeastern US but cases have considerably increased in recent years, both in number and in geographic range (see below).  The causes of this marked uptick (pun intended) are likely multifactorial and include the warming climate and patterns of deforestation, with homes being built closer to wooded tick habitats (more exposure) and breaking up forests (fewer predators to keep down animal reservoirs of Lyme, such as the white-footed mice). 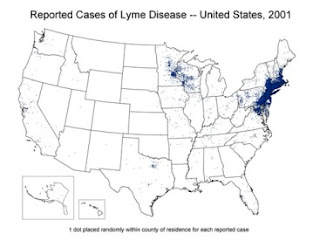 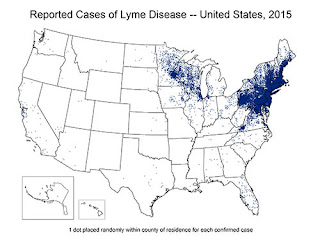 Not surprisingly, these same trends can been seen with other tickborne diseases such as babesiosis, which is the topic of the report that I have been working on.. However, knowing that 20-50% of upstate NY ticks have been found to carry borellia burgdorferi, and that children can develop disabling and chronic symptoms from severe infection, I was most concerned about Lyme.

Lyme disease may develop when people are bit by an infected blacklegged tick that attaches for at least 36 hours. Within 3 to 30 days, individuals may develop early stage infection of a classic erythema migrans rash (bulls-eye in appearance), fatigue, fever, and muscle and joint pain. Some infected individuals do not display early symptoms. If not treated with antibiotics or if an individual does not display early symptoms, people progress to the early disseminated phase of infection, marked by symptoms that may include neurological effects (severe headaches, facial nerve palsy, poor cognition, inflammation of the brain and spinal cord, and/or nerve pain), cardiac effects (inflammation of the lining of the heart), and joint problems (arthritis with severe swelling of large joints). Treatment with antibiotics is usually effective for these severe complications, although there is a lot of controversy about this among the medical community.  The medical literature describes patients that go on to suffer persistent symptoms of late Lyme diseases that have not been shown to be treatable with antibiotics.

What is a worried parent to do?  Like any good public health practitioner, I first checked the CDC website, which directed me to the 2006 Infectious Disease Society of America 2006 Guidelines. They state prophylactic treatment is warranted when the following criteria are met:

1.      The tick is indeed a deer tick. Check.
2.      The tick was attached for at least 36 hours. Check.
3.      At least 20% of the ticks in the area are known to carry Lyme.  According to the University of Massachusetts Medical Zoology department surveillance data, exactly 20% of the ticks they have tested from the Ithaca zip code tested positive for Lyme. Check
4.      Treatment can be administered within 72 hours.  Close enough, check.

Next, I looked into having the tick tested. Our new friends at the University of Rhode Island recommended University of Massuchetts Medical Zoology lab for testing the tick. UMass has great marketing for an academic lab, using a branded name “TickReport” with the motto Because of a piece of data is peace of mind. I was a sold customer.  In addition, they boast highly sensitive and specific testing for properly collected ticks, and the test includes internal quality control checks.  We paid $50 and sent our little arthropod off in a ziplock bag on Friday and got the report back on Wednesday, complete with a picture of our tick under the microscope and the full panel of possible diseases:

Hooray! Negative for Lyme among other things.  The CDC cautions that one should not equate the negative tick with negative infection because the individual could have had other unrecognized bites.  Also, a positive test does not mean the spirochete was necessary transmitted from tick to human.  I still enjoyed contributing to the lab’s nationwide surveillance efforts.  Our tick joined their sample of 140 ticks from our future zip code, of which 20% were positive for Lyme.

When I first encountered the harrowingly large tick population surrounding our new house, I felt overwhelmed and disheartened by the fact that enjoyment outdoors could come at a price.  But Prevention is Power, right?  Unfortunately, the prevention of Lyme Disease at a population level involves interventions beyond my control (reduced deforestation, halting globing warming).  However, I can employ the best methods for individual prevention (clothing and hats treated with permethrin, DEET, tick checks including looking in ears) and educate my patients. These ticks don’t know who they are dealing with.